Brilliant use of light especially at dusk and dawn.

Born and raised on a farm in the eastern highlands of Zimbabwe, David captures the wildlife, big skies and untamed endless landscape that is Africa.

“I have, so far, never discovered a place that so much alters human perception than the African bushveld. Many years ago we made the mistake of cutting ourselves off from animals, but in the bushveld one can still listen to the conversation between nature and the divine. It is a place where a finely sustained balance exists against a backdrop of raw beauty. When I spend time there I discover myself taken by a heightened sense of consciousness that feeds my capacity for awe and astonishment.”

“I am inspired by the power of Africa and if I manage to capture a little of this in my work, then half my talent has been put to good use.”

David began his professional painting career in the mid-1990’s and exhibited in various group and solo exhibitions all around South Africa including Johannesburg and Cape Town. His work was also sold in established galleries such as the Cape Gallery and the Everard Read Gallery. In the late 90’s David moved to the great karoo town of Nieu Bethesda where he built a new studio and sold many a piece still wet off the easel.

By 2003, his work was discovered by the international market and he now paints exclusively for Call Of Africa’s Native Visions Galleries. In 2006 and again in 2007, David had works chosen by the prestigious Leigh Yawkey Woodson Art Museum’s juried “Birds In Art” competition, where only a select few artists’ works are chosen out of thousands of submissions. Since 2003 his work has been exhibited annually at the SCI shows in Las Vegas and Reno. David’s work is held in numerous private collections worldwide. 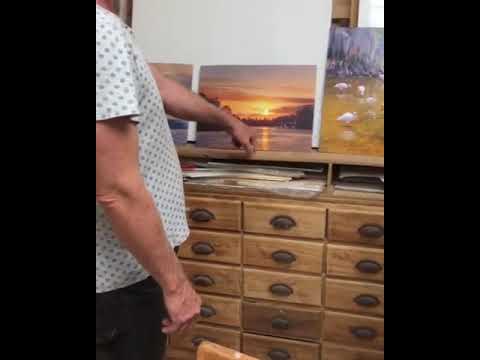 “The Light Fantastic” – The Wildlife Art of David Langmead

Renowned Zimbabwean wildlife artist David Langmead's amazing new book invites you on a journey into the secret heart of the African bushveld and beyond. Available as a standard deluxe edition for $60 and also a premium leather bound edition for $125. Shipping is additional. Please contact the galleries to inquire and to purchase.

David and Bronwen Langmead live near the end of a long dirt road. While this, by itself, may not seem extraordinary, the country lane wending past their home into the middle of nowhere is located in the mountainous interior of South Africa. The Langmeads and their three young children inhabit an old converted sheep shed in Nieu Bethesda, a frontier-era village, population 50. From the